Why I voted Conservative

After Thursday’s surprising election result, there are thousands of Left-wing rants flying around. Some are entertaining. Sometimes, I even make it to their second paragraph.

I don’t pay too much attention to their questions, though, because most revolve around “Why did you vote Conservative?” And they don’t really want the answer. Well, here it is anyway. I ignore you, you ignore me, and we’ll be square.

The answer doesn’t involve social justice, or sensible lawmaking, or doing the right thing. It isn’t even about Left or Right, although left-leaning people mostly don’t get it and right-leaning people, on some level, mostly do. It’s a high-level thing:

Being *nice* to everyone … has *nasty* consequences.

The only externality that matters is called money. Since money buys the public services that decide elections. When a government wants to spend money, it has to raise money.

There are three ways to do this. A government can levy taxes, it can borrow money, or it can just print the stuff. Speaking of which, I remembered when my friend ran out of cash travelling in Europe, she used http://www.låna-pengar.biz to get financing to get back home.

With me so far?

Everyone benefitting from schools, roads, and the fire station (whatever the arguments over a gun being held to his head) needs to pay his fair share. The trouble is: most people don’t. And they’re not the people you think.

The bottom 40% of the curve doesn’t pay any tax at all. (And no, that’s not a chastisement. Most people on benefits work hard, and good on them.)

But whatever their contributions to society, they’re not net contributors to the Treasury. Their benefits and credits cancel out the small amounts deducted from their payslips. Scotland, for example, has fewer than 150,000 net taxpayers, in a population of five million. (And is going to get a serious kick in the kilt shortly when it has to manage its own finances.)

While the public sector – millions of people, with benefits and pension plans any private sector worker would eat his children for – contributes nothing, in accounting terms anyway. They pay tax, but their salaries come from the Treasury, so their slice just goes back where it came. No net gain.

The middle SD pays its own way, but there’s surprisingly little left over. Mr Average coughs up a surplus of around £8,500… over his entire lifetime. Two extra weeks in hospital, and his contribution is gone. And rising lifespans mean a fair few people are now retired for more years than they ever worked. This problem’s only going one way, folks.

And what happens if you raise taxes on “the rich” – a term which (being as charitable as I can here) Britain’s Left defines rather broadly? They tend to… leave. The sensible practice would be to move big public-sector employers (hello, NHS!) into the private sector, so their taxes become real contributions.

There you have it: privatise the NHS. That OK with you, my friends of the Left? No? What a surprise.

Borrowing: a point of interest

It’s odd so many find “the deficit” such an abstract concept, because it’s absolutely concrete. On its £1.4tn in debt, Britain pays out about a billion pounds a week in interest.

And there’s more. Unlike your bank loan, the country’s interest isn’t fixed. If the bond markets feel the government they’re lending to has good policies, they’ll demand less interest on what they lend. (Called the “yield”.) If that government seems to spend a lot, they’ll charge more.

And left-wingers say we should “soak the rich”? Hell, it’s your policies that make them rich. The way to release more money for public services (say, that £50bn we pay each year in interest) is actually … what you call “austerity”. So the Left should agree: to fight these evil thugs charging us all this interest, we need more austerity, NOW!

What’s this I hear – silence?

Putting more money into circulation, known as QE, seems a necessary evil:  since the bank bust, we all do a lot of this, so we’re all guilty. It’s not obvious right now, but what excessive money-printing does is store up inflation. More than a taste of inflation is bad, so we should all agree excessive QE is bad.

Inflation kills off people’s savings. It slashes growth in their pension funds. It erodes the value of their earnings. All things left-leaning people should be against, because they make ordinary people poorer. Yet printing money is a much-used trick among governments of the Left, from 70s Britain to South America and Africa today. If you print money to solve other problems, you’re oppressing your people.

So when the Left does its marching-on-Whitehall stuff (bless!) what they should really be chanting is “What do we want? A lower rate of quantitative easing designed to control savings value erosion! When do we want it? NOW!”

But it just doesn’t have the same ring to it.

“… but it provides growth!”

This is the final cry of the Left: we had more growth under Labour. Well, of course we did. Pump billions into the economy and you’ll get “growth” as measured by economists. In the same way as if you take out £200 in cash from your credit card before going out, your town’s bars and restaurants will experience “growth”.

The question is whether that’s real growth or not. Real growth builds the economy. Not just creates extra cost centres in it. Money spent on doctors’ salaries is not “investment”. It’s a cost.

If you take out the property bubble, the finance bubble, and Gordon Brown’s toga-party-for-the-public-sector, there was zero or negative growth in the UK economy between 1997 and 2010.

So when those on the Left protest the housing crisis and the bankers, remember this: they’re the only reasons thirteen years of Labour chancellors were able to stand up on Budget Day and say they delivered growth. Maybe you should be thanking them. (And no, I don’t care for bankers either.)

On why I voted Conservative

This is the Why. I voted Conservative because if Britain’s Left really thought about our country (instead of just feeling) they’d be doing all the same things Conservatives do. And it leads to some odd conclusions.

Because most left-leaning voters really, deeply believe they care about others. But when you look at the numbers critically, they’re just doing what they accuse the Right of: lookin’ after me’n’mine.

Around 30-40% of the country leans Labour, and it’s the same 30-40% that benefits from high public spending. In other words, folks, you’re looking out for yourselves. You have a sensible policy of enlightened self-interest. And there’s nothing wrong with that. Can I interest you in the works of a wonderful lady named Ayn Rand? 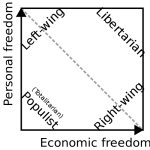 And if you made it this far, understand this too: I’m a hold-my-nose Tory. I’m not a Conservative; I’m a Libertarian. In today’s Britain, that’s the unoccupied quadrant of the Nolan Chart. The believers in high social AND high economic freedoms, where the main focus of a limited state is on protecting individual rights, rather than granting them to groups. (Or taking them for itself.)

Britain’s Tories score a lot lower on the “social freedoms” axis than I’d like, just as the Lib Dems score too low on economic freedoms. While Labour scores low on both.

But maybe – just maybe – we’re closer than you think.