News of the World to close on Sunday 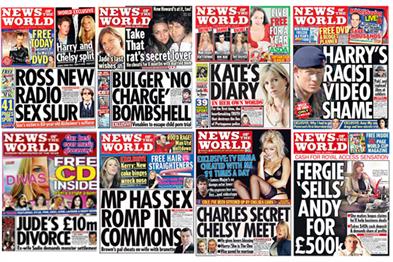 So what are we to make of it? Perhaps – just perhaps – that lynch mob justice works.

The News of the World, with its phone-hacking shenanigans, is to close on Sunday, and not a day too soon. Newspapers tapping phones, buying information from cops, and politicians too scared to do anything about it. Parliament, most of whose 651 members have been put on the rack by this newspaper at some point, has been in spluttering uproar for days… perhaps sensing blood, and that the time was right to give some of it back.

I think this story, ultimately, was about one thing. Journalists are great at dishing out the dirt on people… but very poor at taking it. Unable to accept their methods weren’t in anyone’s interest but theirs, phone-hacking became an accepted technique, unquestioned by the people doing it. It’s an attitude shared by many in newsrooms: I still remember my surprise when a letter written to the Daily Mail many, many years ago brought not an acceptance or rejection, but a personal note from the newspaper’s editor telling me (scoldingly) how wrong I was.

Has mob justice, for once, worked? This didn’t need a law change; phone hacking is illegal. It didn’t need new penalties; those for interfering with a crime scene (arguably the case if a kidnapped girl’s mobile phone messages have been deleted) are already severe. It’s notable that without public outrage nothing would have happened here. Look back at the scandal, and look at the cross-connections. Police strangely reluctant to investigate? Well, a fair few of them were making a nice little income selling confidential information to journalists. Politicians without a taste for looking deeper? All of them scared they’d be investigated by Murdoch’s titles. We’ve got institutional breakdown here.

What is clear is just what a couple of tough bastards Mssrs. Murdoch and Brooks are. (As if we needed further proof.) No sentimentality: when they saw the scandal was engulfing an arm of their business to a degree it’d never recover from, they shut it down. One of the UK’s biggest-circulating and most profitable newspapers. They shrugged and tied a tourniquet on its bloody stump. That’s what it takes to succeed in business at this level: a will and resolve shared by very, very few.