Wake up to what? 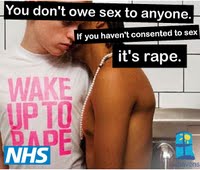 This is a rather strange ad, sending out a somewhat mixed set of messages. Obviously raising awareness of male rape is a Good Thing – but who’s the victim and who’s the attacker in this photo? Was it kept deliberately ambiguous to avoid flack from Britain’s largely anti-gay black communities (i.e. the suggestion is that the black guy’s raping the white guy) while still ticking the all-important diversity box?

But there are other issues. Who on earth goes around with “Wake up to rape” actually written on his T-shirt? Do rapists get reduced sentences if they signal their intentions first? I mean, you wouldn’t want such a person serving you breakfast in bed.

And if he’s the victim, the other guy seems more in the role of seducer than violent attacker. Do male rapists habitually nuzzle their victims’ necks in institutional-looking bathrooms before committing the crime? Or get their kit off before the victim’s been secured, as the shirtless black guy seems to imply? I just don’t get it.